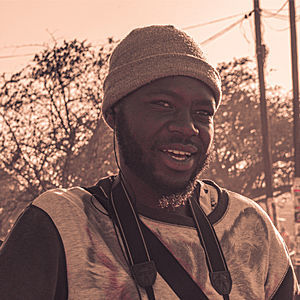 Shards of broken glass make the most beautiful mosaics. The pieces depicted below give insight into what makes the everyday lives of residents of Chitungwiza and Hopley beautiful, how they persevere through harsh economic conditions, and manage to survive through each day.

The scenes presented here are raw and uncut. They are just mere frozen memories of a journey in an environment where people survive on a shoestring budget. 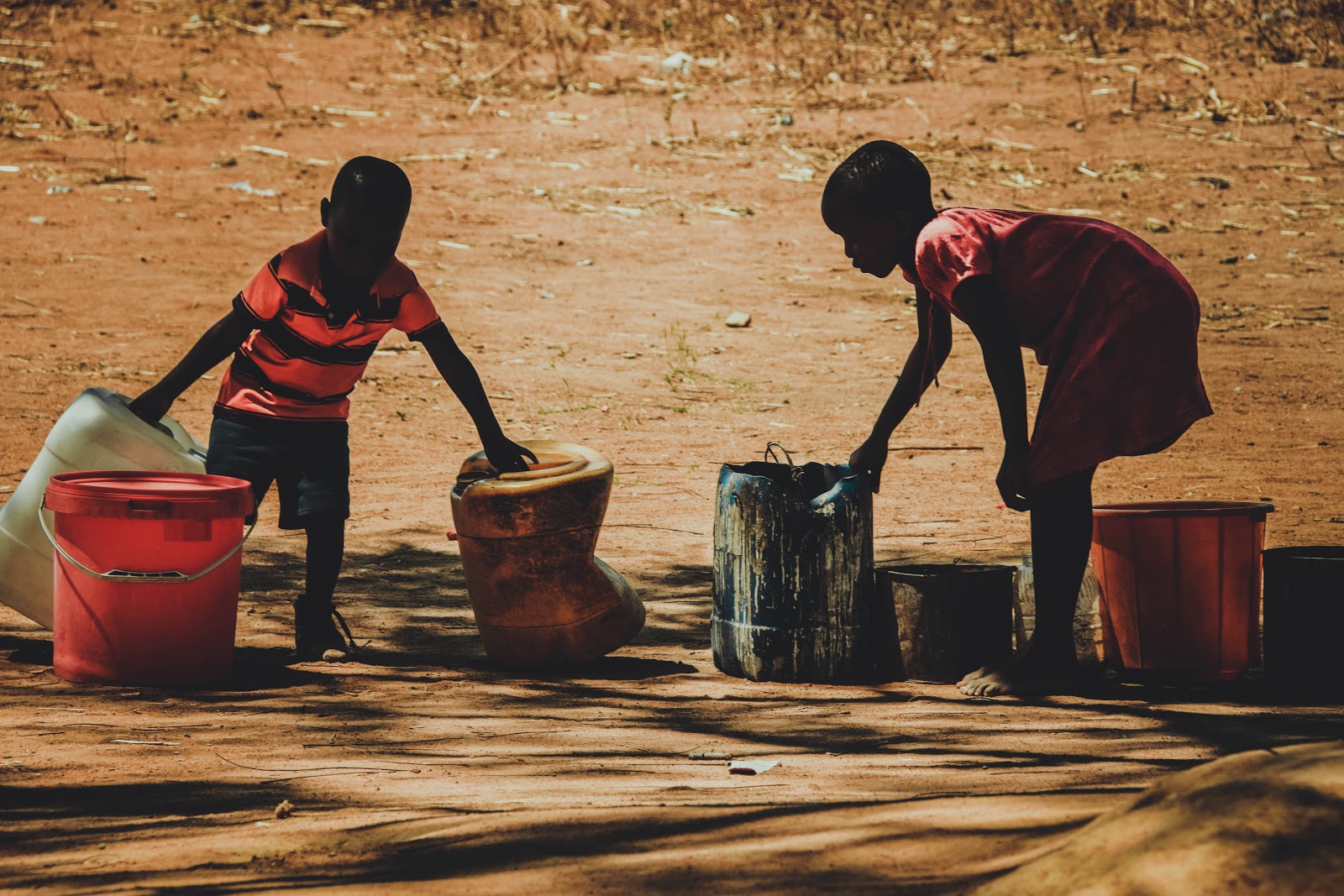 A young boy and his sister arrange water containers at a borehole queue.

It's quite evident that most of the young children in Hopley do not get a chance to get an education. Most of them spend their daytime at water queues replacing their parents, who would have queued for the whole night. Their development is affected by these circumstances.

One member of the Hopeley community said that some young girls are getting married off at a very young age as families seek to alleviate their poverty. Some girls, as young as 12 years old, are being married off. 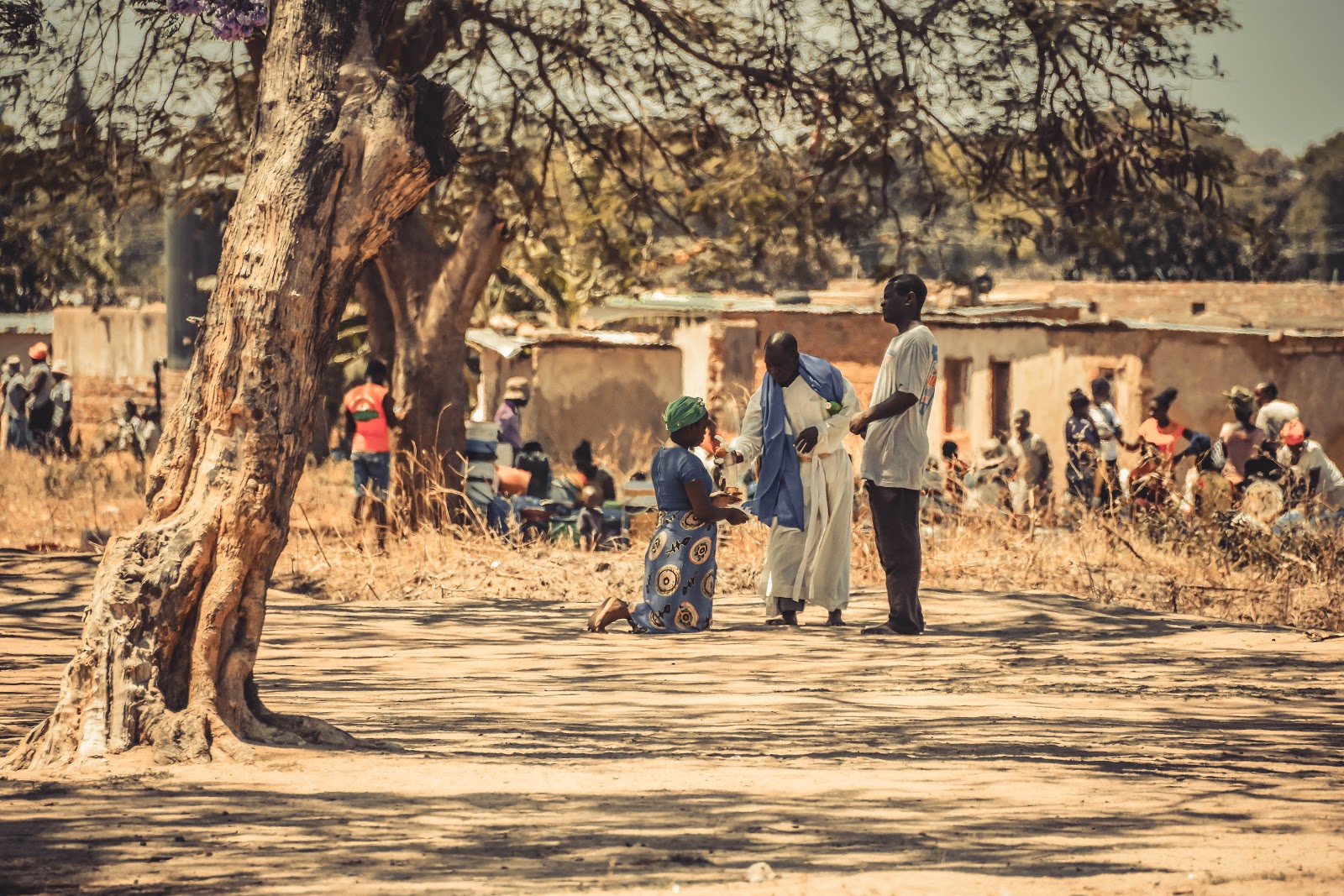 A woman receives 'blessed stones' from an apostolic sect 'prophet' while people queue for water at a borehole behind them in Hopley. 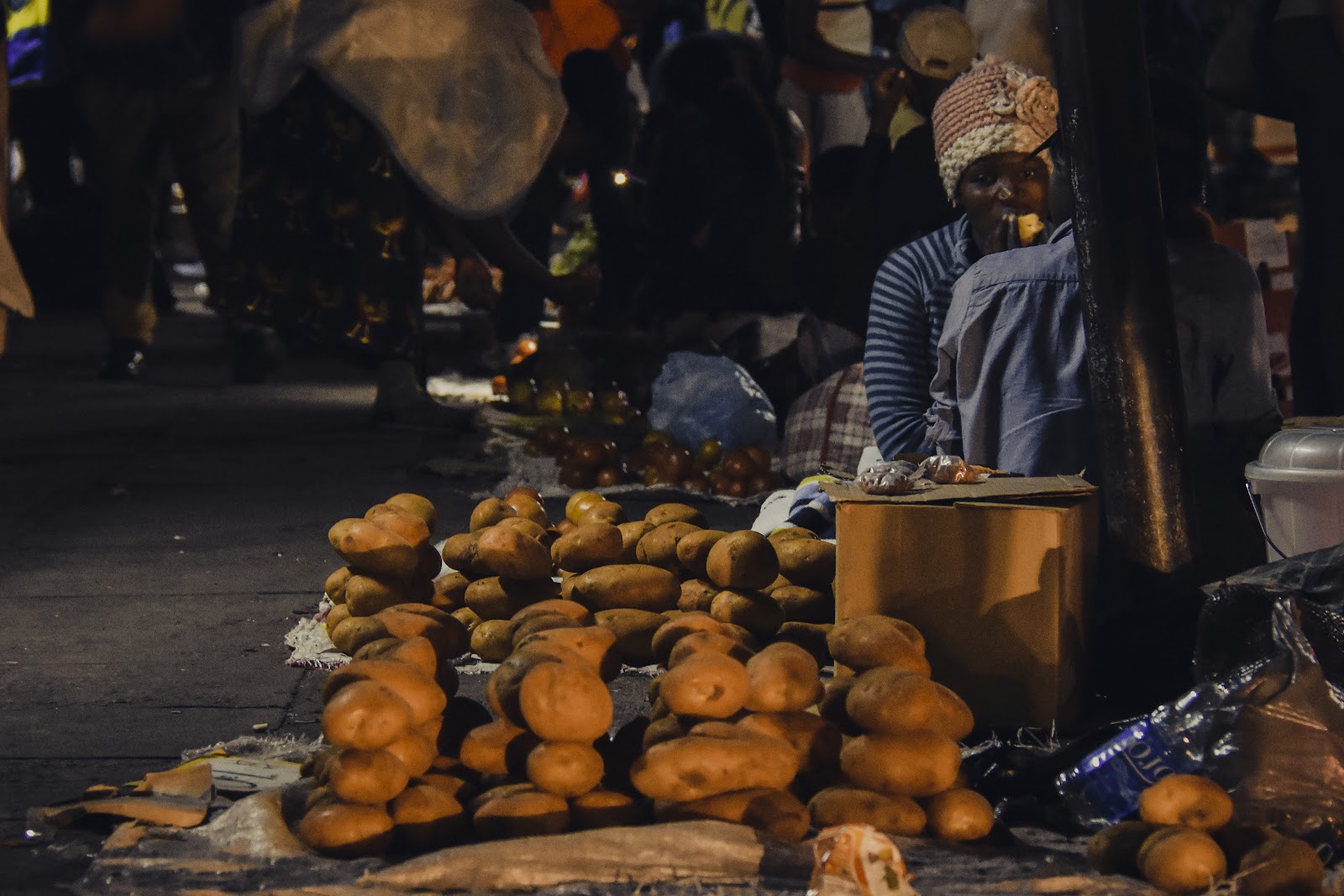 Piles of fresh produce displayed on the sidewalk of Julius Nyerere around 8 pm on a Thursday.

Earlier this year, there was a spike in the number of vendors, mostly women, who spend many days sleeping on the sidewalks near illegal pick up points vending various wares. These vendors do not go home because transport is expensive, and it erodes their profits. This state of temporary homelessness, caused by the high cost of living and ever rising transport costs, forces these mothers to spend their nights on the cold streets trying to raise income to sustain their families.

The current blitz on vendors by the Harare City Council and the Zimbabwe Republic Police (ZRP) has significantly reduced the number of these 'homeless vendors'. 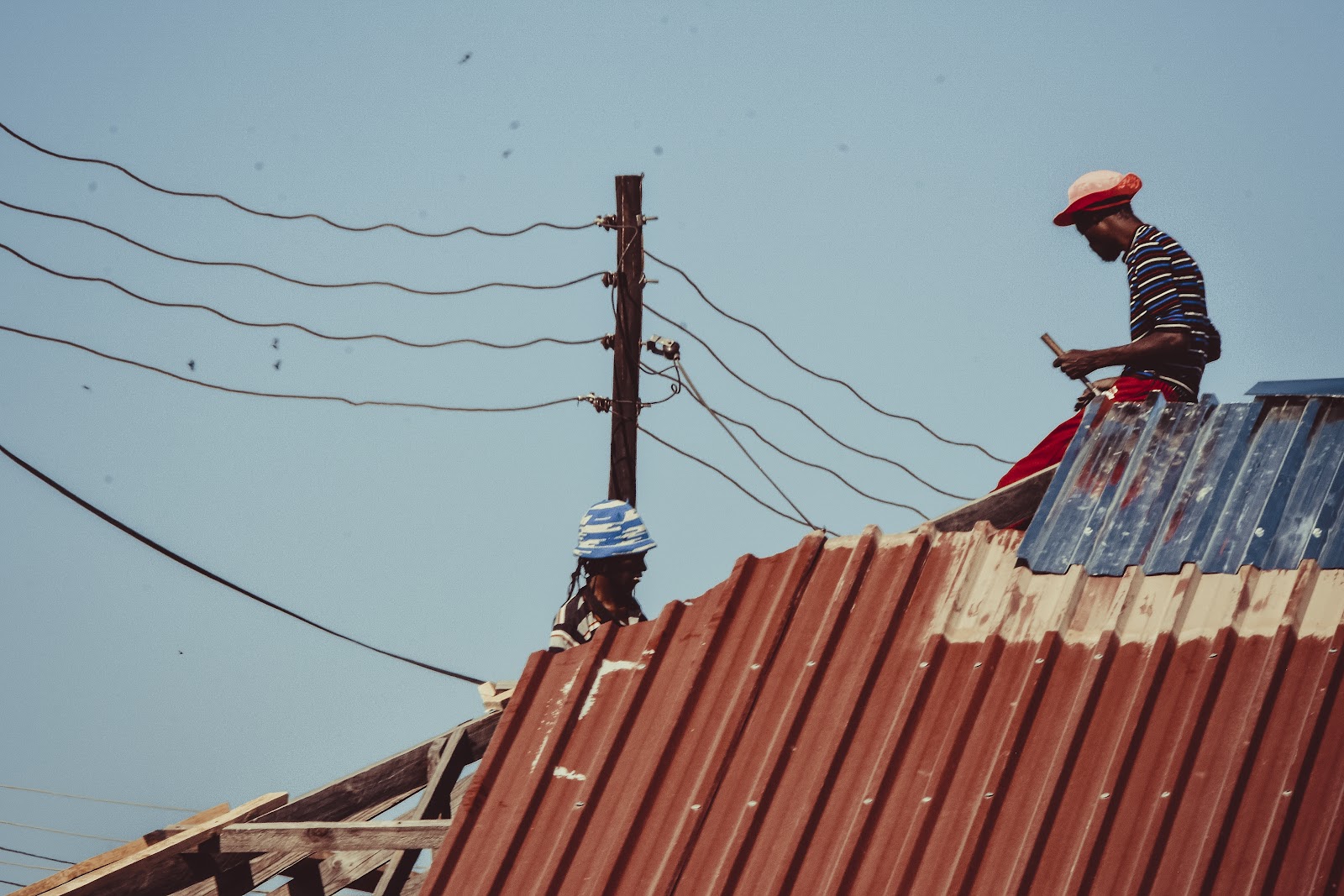 Two workmen fix the roof of a house in Chitungwiza, Zengeza 5. In the background are electricity transmission cables.

Due to low electricity production in Zimbabwe, and a multi-million dollar debt to South Africa's Eskom, Zimbabwe Electricity Transmission and Distribution Company has had to implement load shedding schedules across Zimbabwe. The schedule has surpassed Stage 4 with some areas losing power for several hours.

On most days, Chitungwiza does not have power between 5 am and 10 pm.

Prepaid electricity tariffs also went up at the beginning of October 2019. The increase of  over 200% was met with mixed feelings, as other citizens felt that it was a justified hike, while others debated that the increase puts those who earn minimum wage at risk of not having power. Still, the electricity people pay for, is barely available for use. 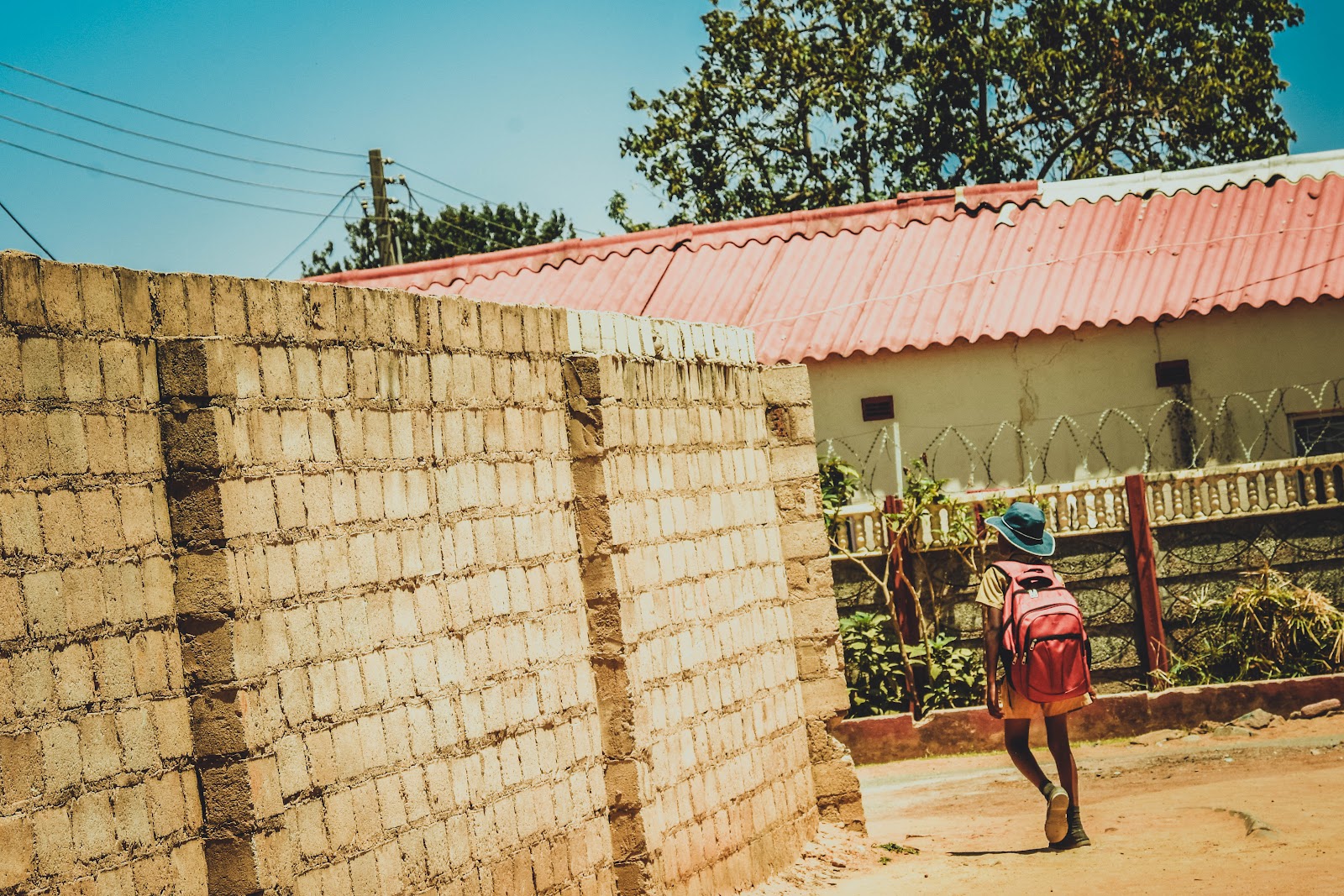 Several students who stay in Chitungwiza learn at schools in central Harare, and they travel over 25 km one way, every day, to attend school. The current increases in fuel prices guarantee that each week, the students’ transport bill balloons. These increases take effect despite the unchanging low salaries their parents and guardians receive, if they are employed!

Some of these students have to endure sitting on the area above the minibuses' engine (paKadoma) for 25 kilometers if they cannot afford to pay the full amount charged for a seat. 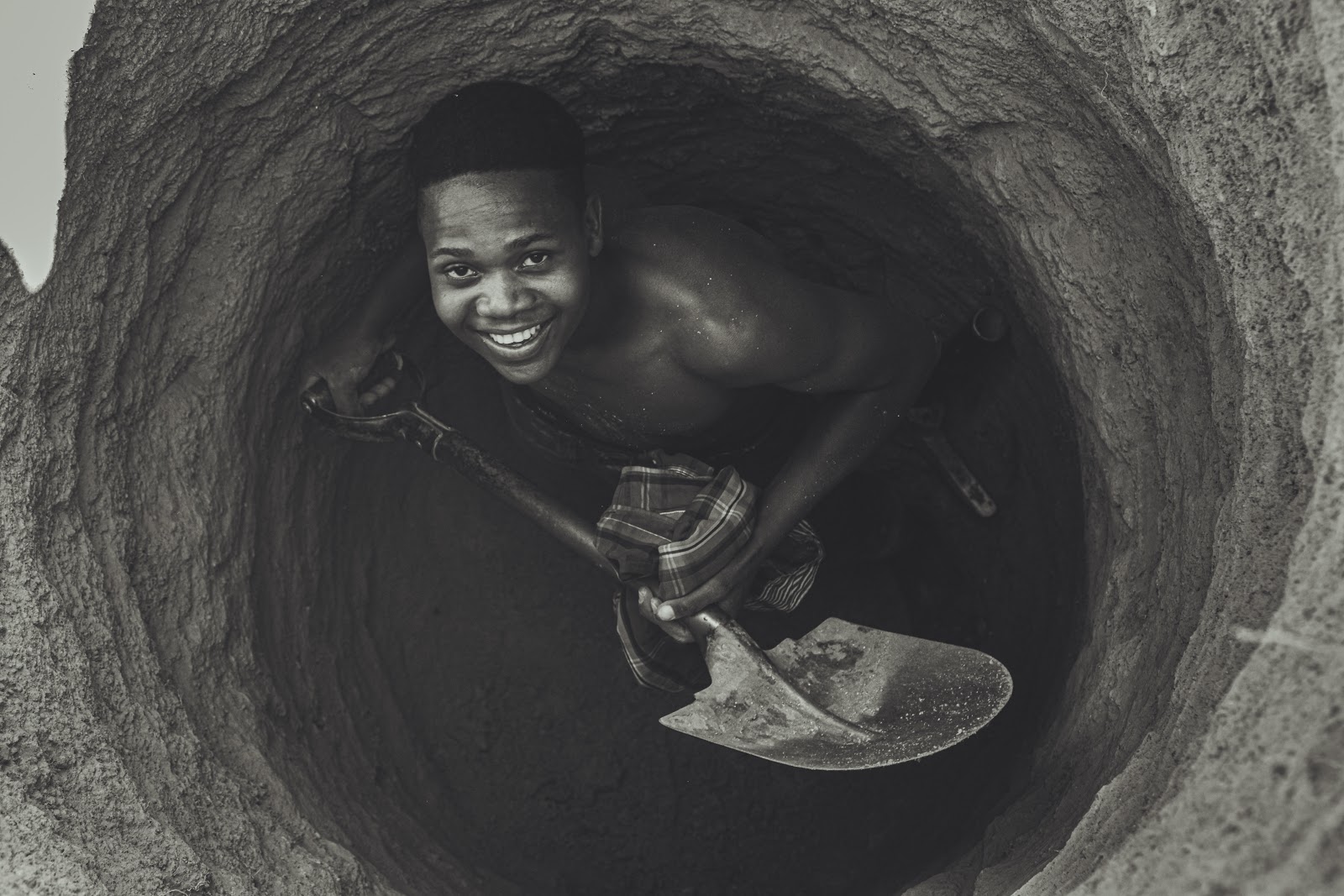 A young man beams up whilst digging a well for a client in Hopley.

There is an acute shortage of water in Hopley as there is no water distribution system at all. The area also has no sewage drainage system. They rely on wells for water and pit latrines as ablution facilities. Hopley is largely populated by low to no income earners who cannot afford to have a well dug at their home. 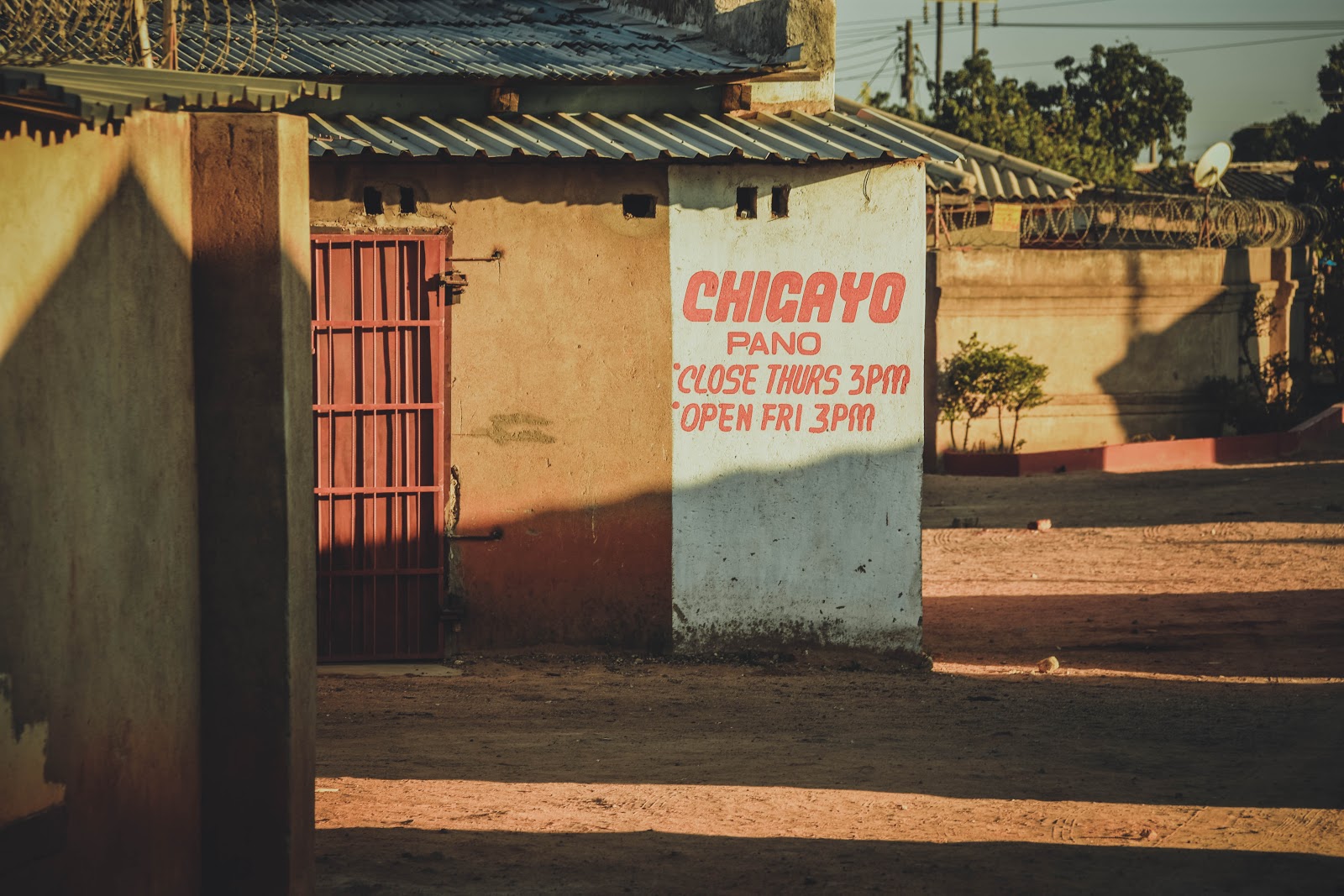 A good number of the populace in Chitungwiza believes in the  Johane Masowe yeChishanu apostolic sect. Friday is their Sabbath, and they do not trade or do any work during the prescribed sabbath times. This, being one of the few grinding mills in this area, means that people in the neighbourhood have to make sure that they have utilized the facility before it closes. 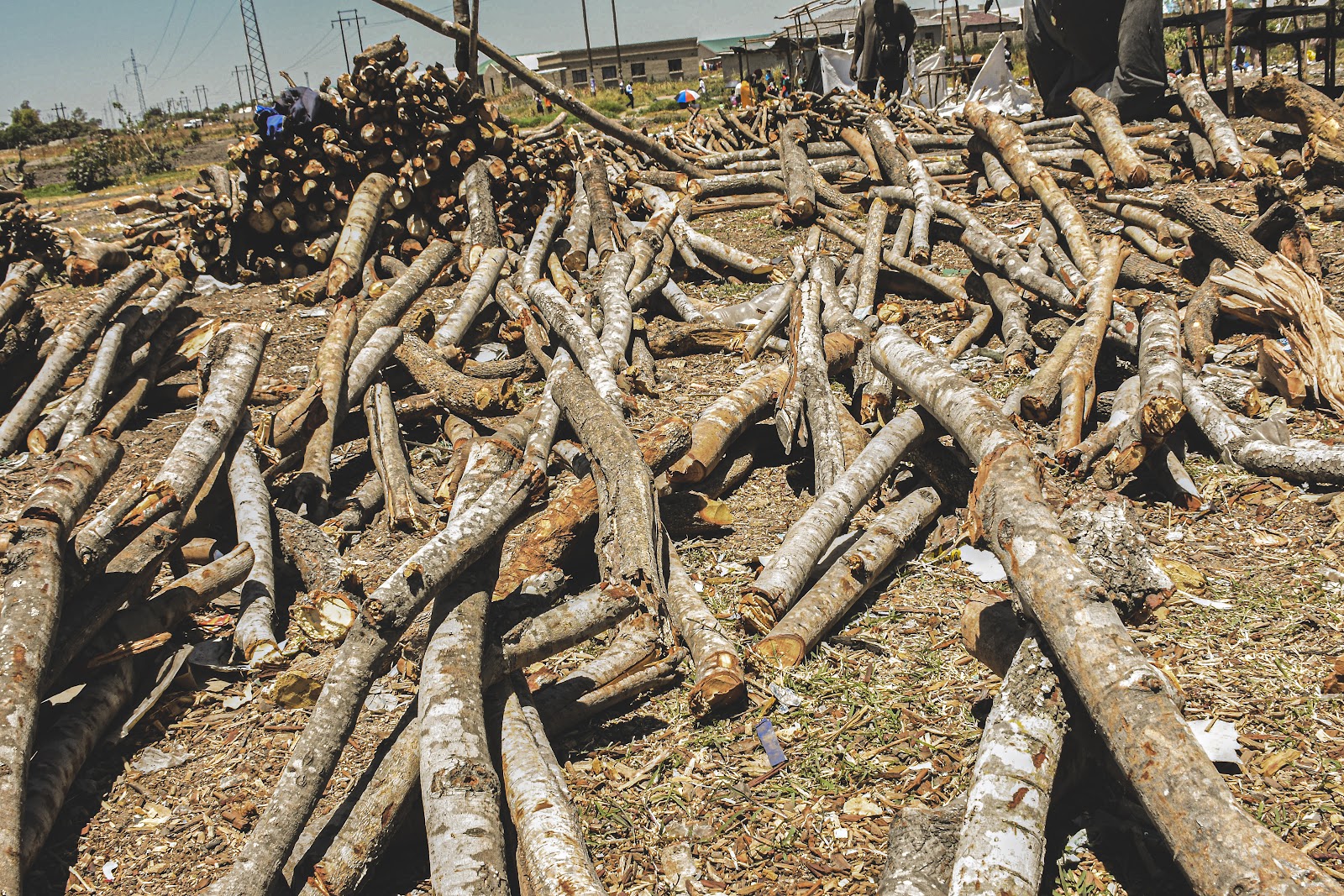 The absence of electricity has caused a surge in firewood usage in high density areas, and Chitungwiza is no exception. Alternative power sources, such as solar systems, are no longer accessible to ordinary citizens as the loss of value of the bond note has put items that need foreign currency to purchase out of the reach of many.

The uptake of solar systems has been stifled by a move by the government to remove import duty on solar equipment and cables. 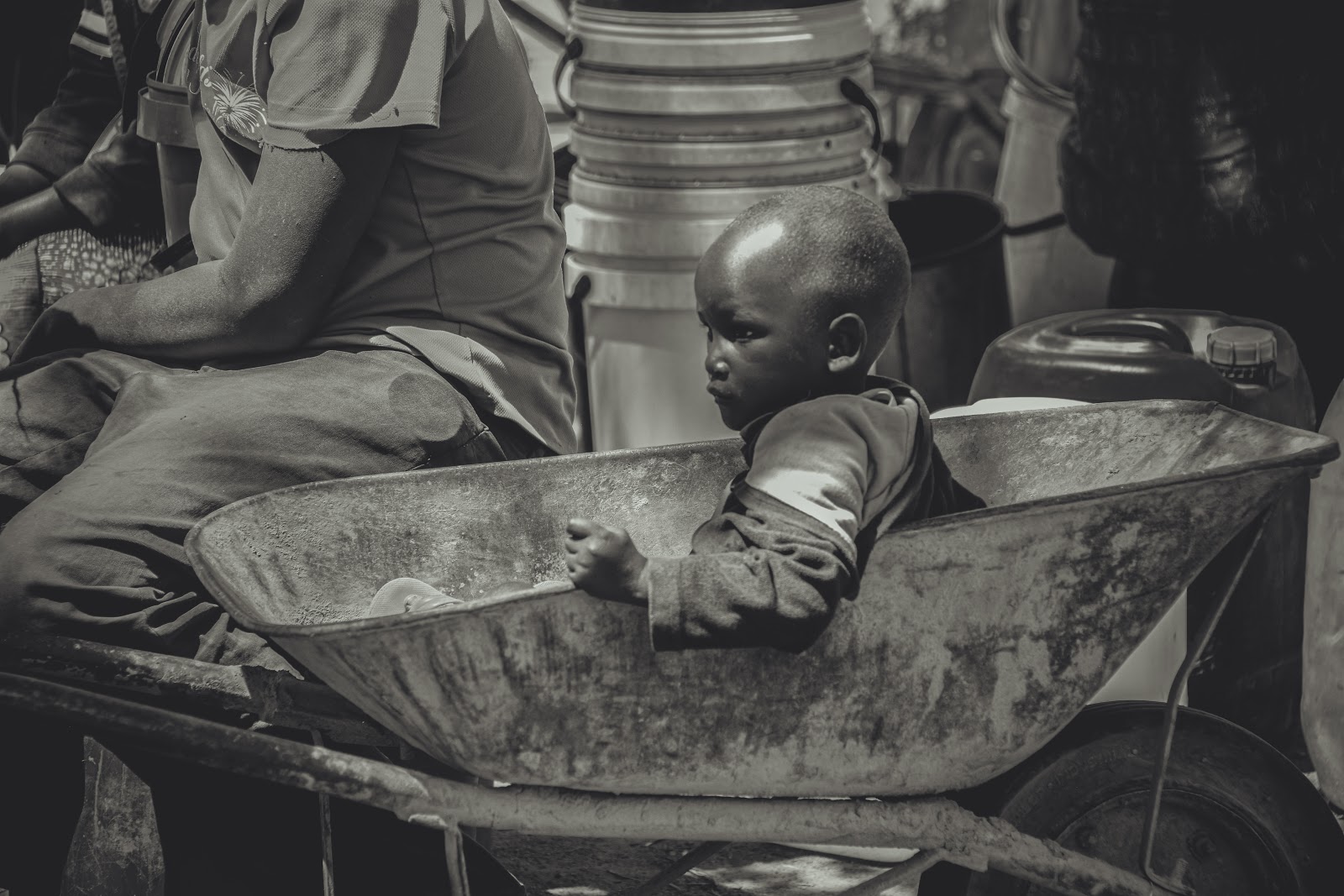 A young boy sits in a wheelbarrow whilst his parents jostle for water at a borehole in Hopeley. 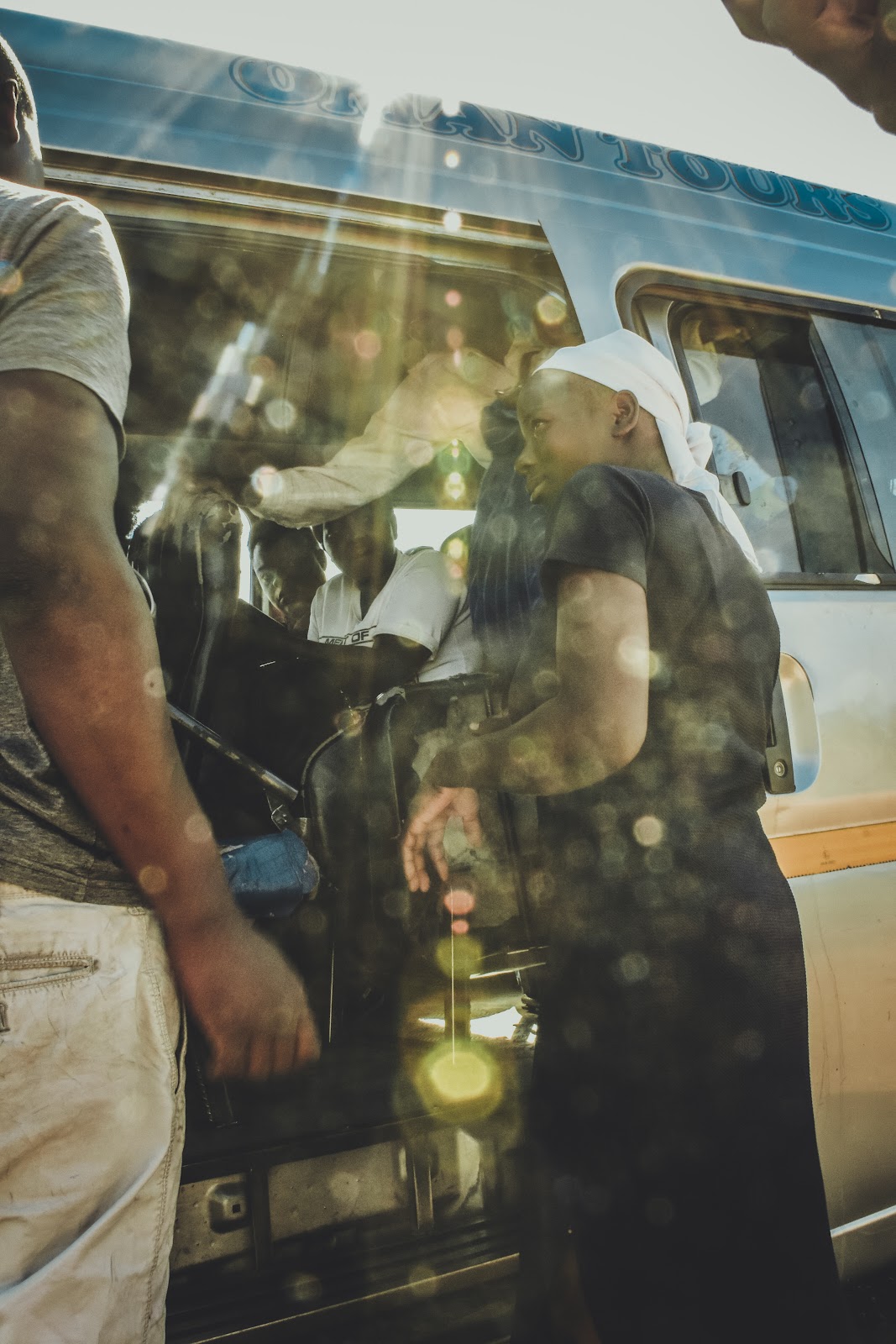 A woman looks at the conductor as another passenger disembarks a kombi (minibus shuttle) along the Makoni-Machipisa route.

The increase in fuel prices caused an uproar which lead to  deadly protests in January 2019. The government reintroduced ZUPCO urban transportation, formed from an amalgamation of different public transport operators. This has cushioned commuters, but the routes the buses operate on are limited, and their small numbers per route or area means that they cannot fully cater for everyone.

The reintroduction of ZUPCO buses means a lot of revenue meant for already existing commuter omnibus operators has now been diverted as consumers have a cheaper option. The kombi crews have to compete with cheaper buses carrying 5 times their capacity, queue for fuel, and the owners still expect them to meet daily targets. 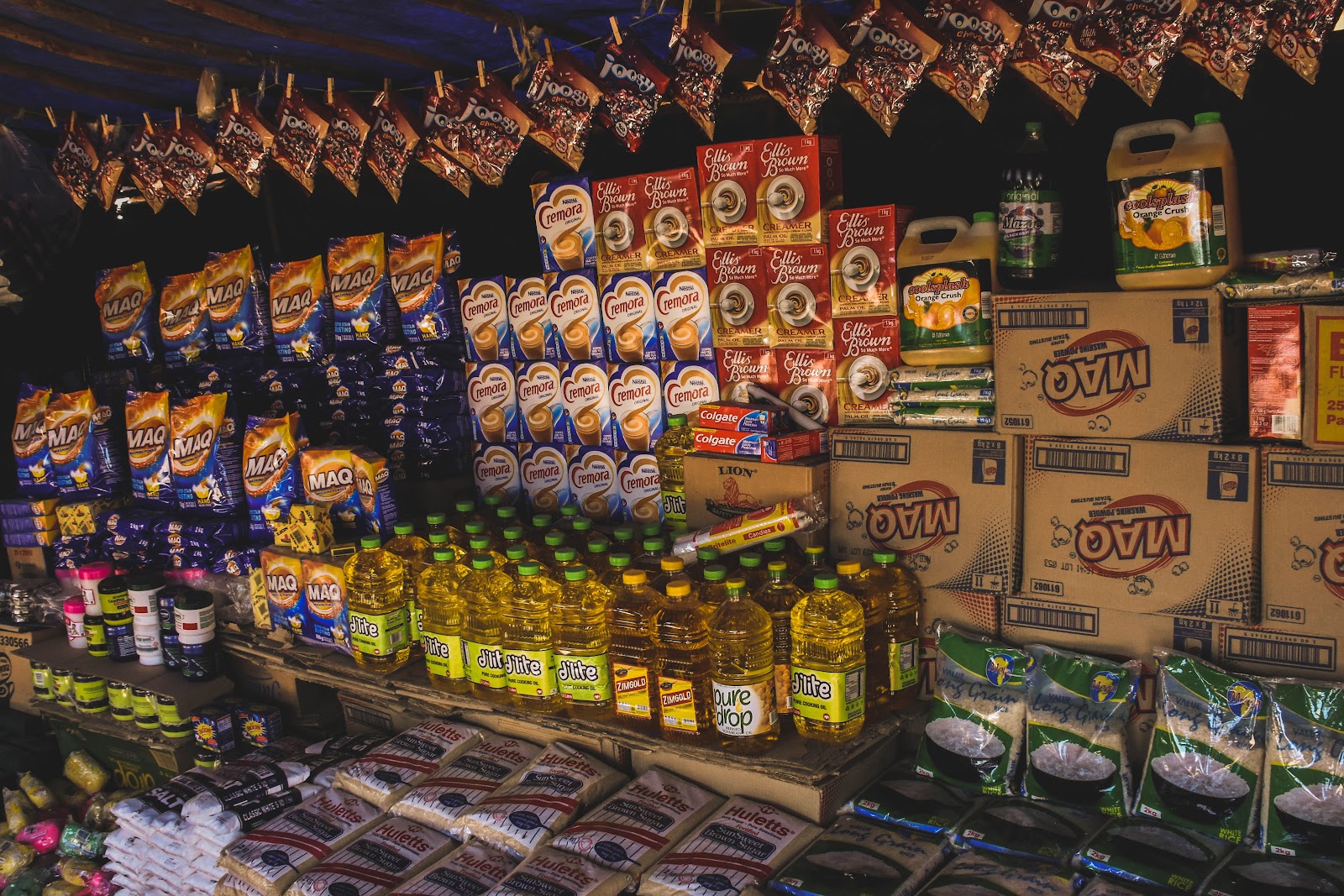 The informal retail sector, i.e tuckshops, vending stalls, and traveling salesmen, form a significant chunk of Chitungwiza's economy. Major retail shops are tucked at Shopping centers, and the size of neighbourhoods in Chitungwiza creates the need for small scale traders who can offer commodities at convenient distances.

These informal traders are also cheaper than proper retail operators because they do not pay any tax for their business and their stalls do not come with high bills which formal shop owners have to contend with. 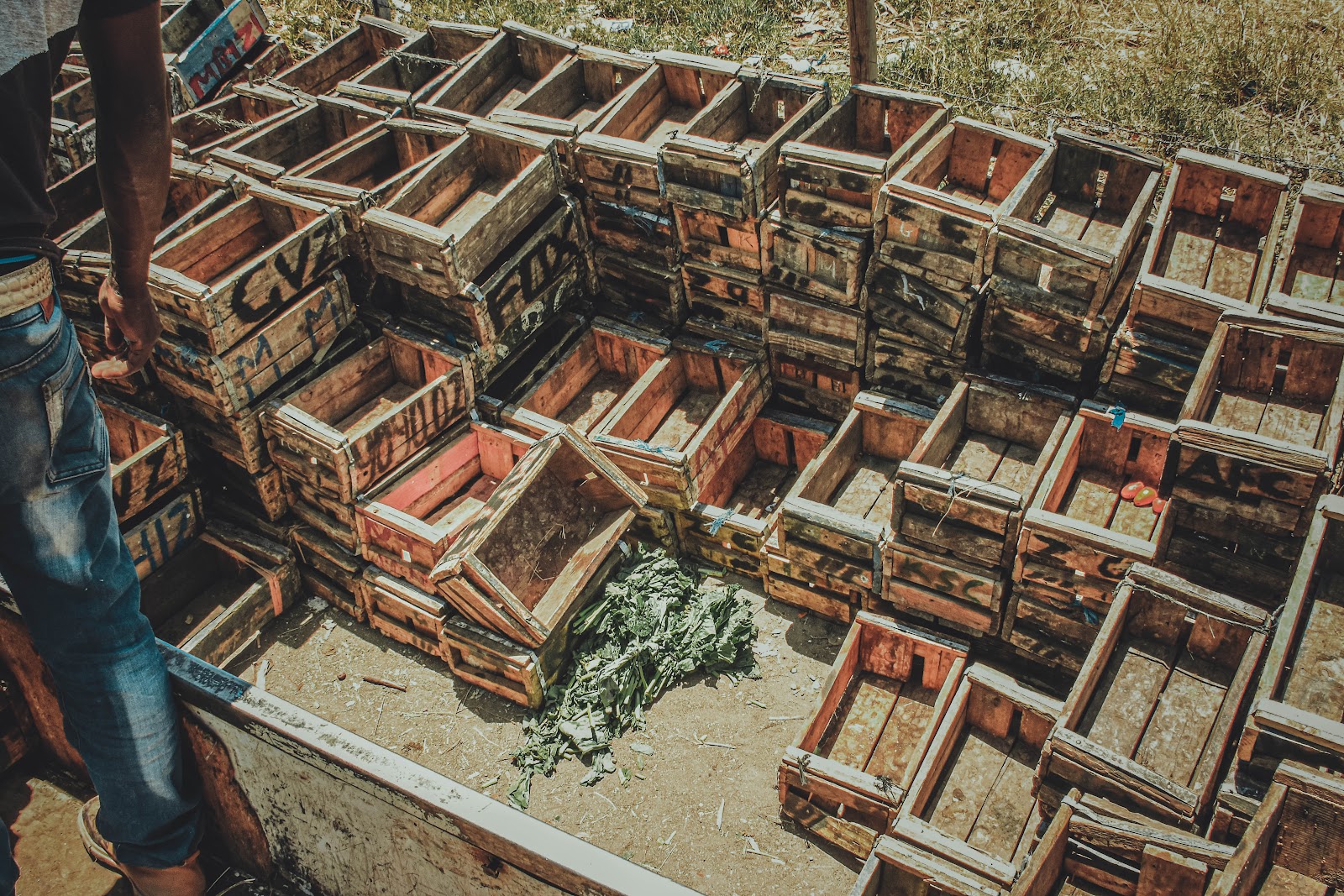 Tomato boxes being packed away after a long day of selling at Jambanja Farmers Market.

The  current drought has limited the number of vegetables that can be found on the market. Jambanja is famed for its farmers market, which is graced by farmers from Dema and other places as far as Marondera. However, traders at Jambanja have noted that there is a sharp drop in the produce being delivered for sale.

This is one of the markets that feeds the vendor stalls and hawkers throughout Chitungwiza, and beyond. 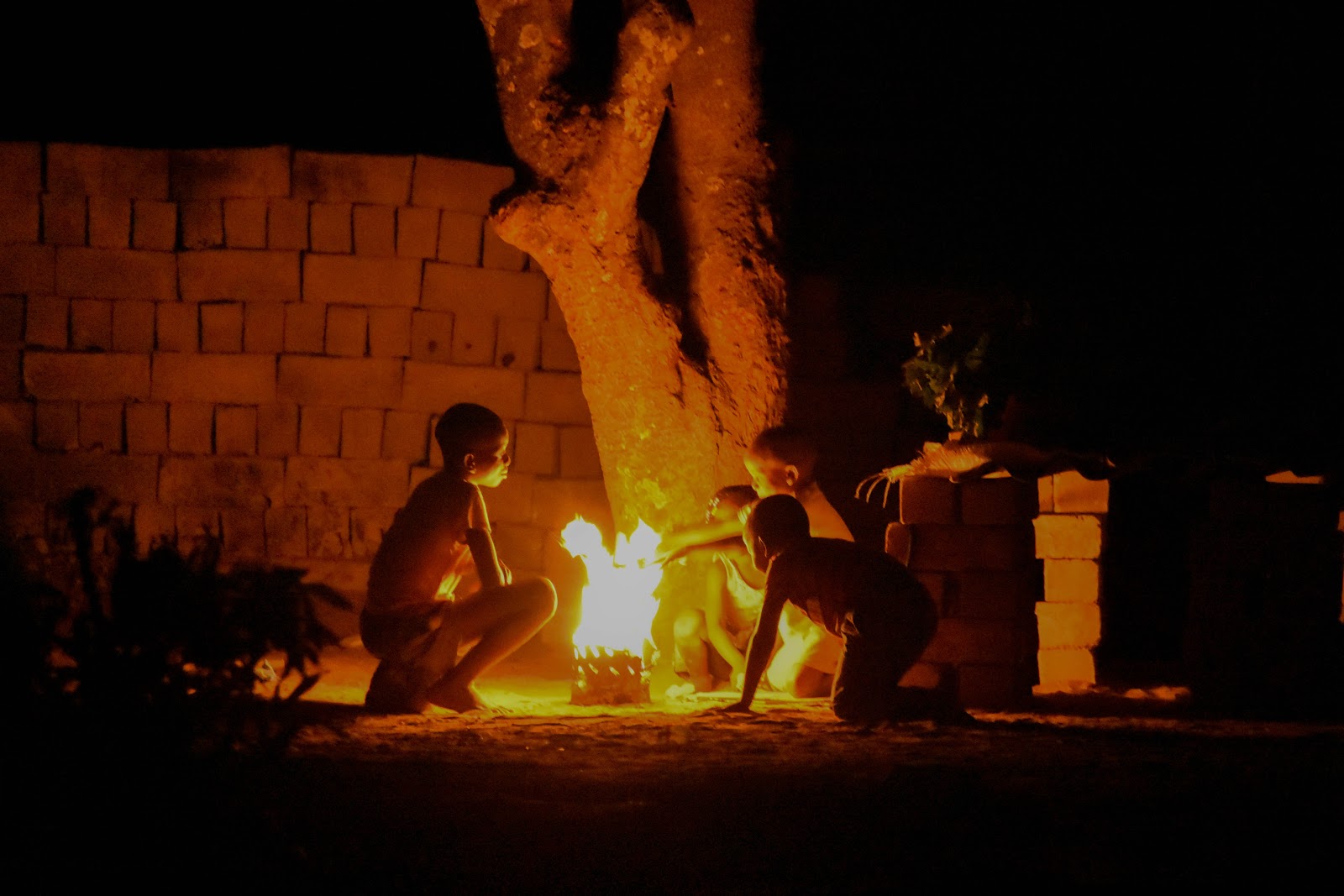 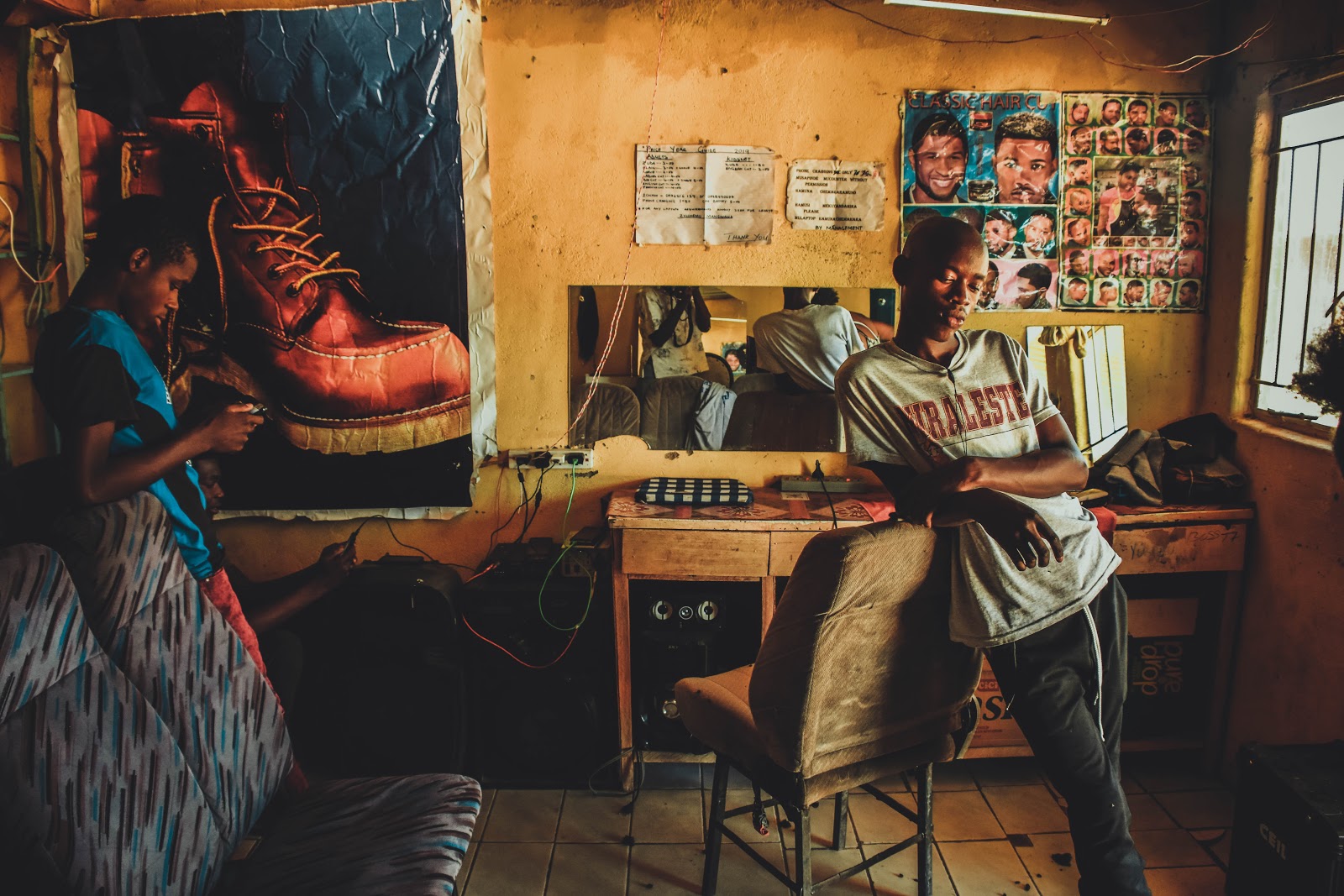 A barber in Hopley relaxes in his shop. This place also offers a solar powered 24hour cell phone charging solution as there is no electricity distribution infrastructure Hopeley. 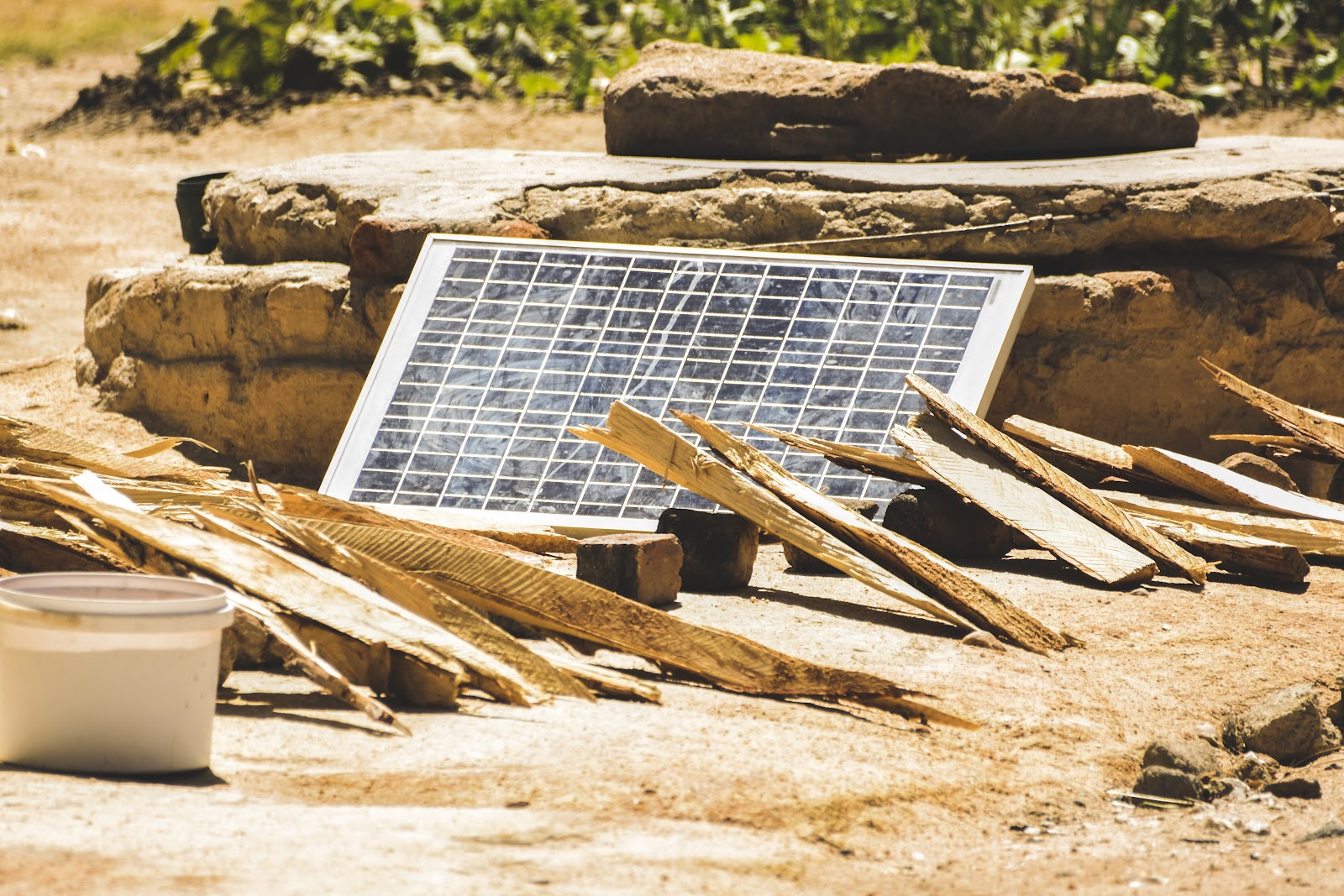 A firewood stall in front of a house whose lights are solar powered. 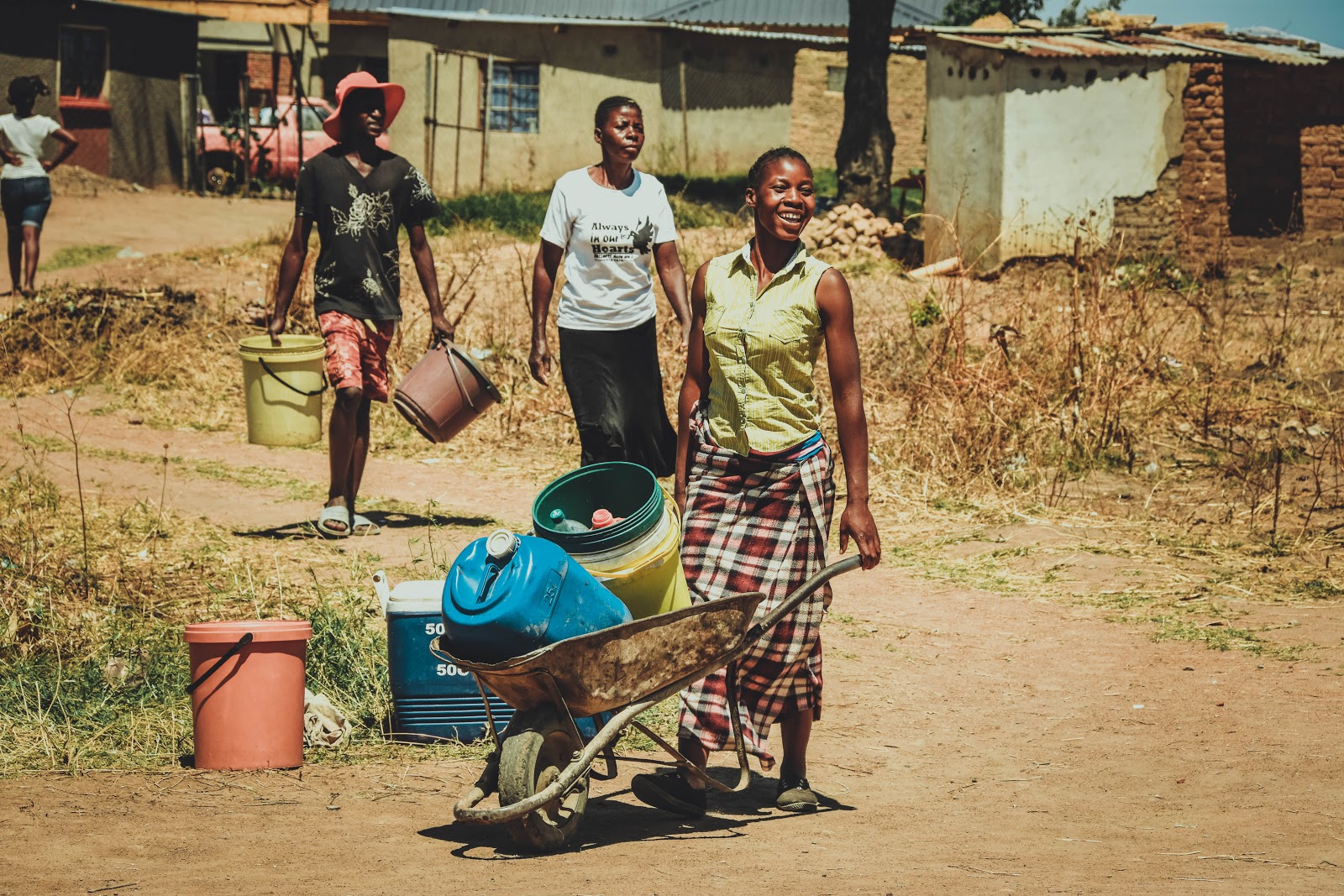 A woman smiles happily as she arrives at a borehole in Hopley upon realising that her neighbour was still holding her place in the queue. 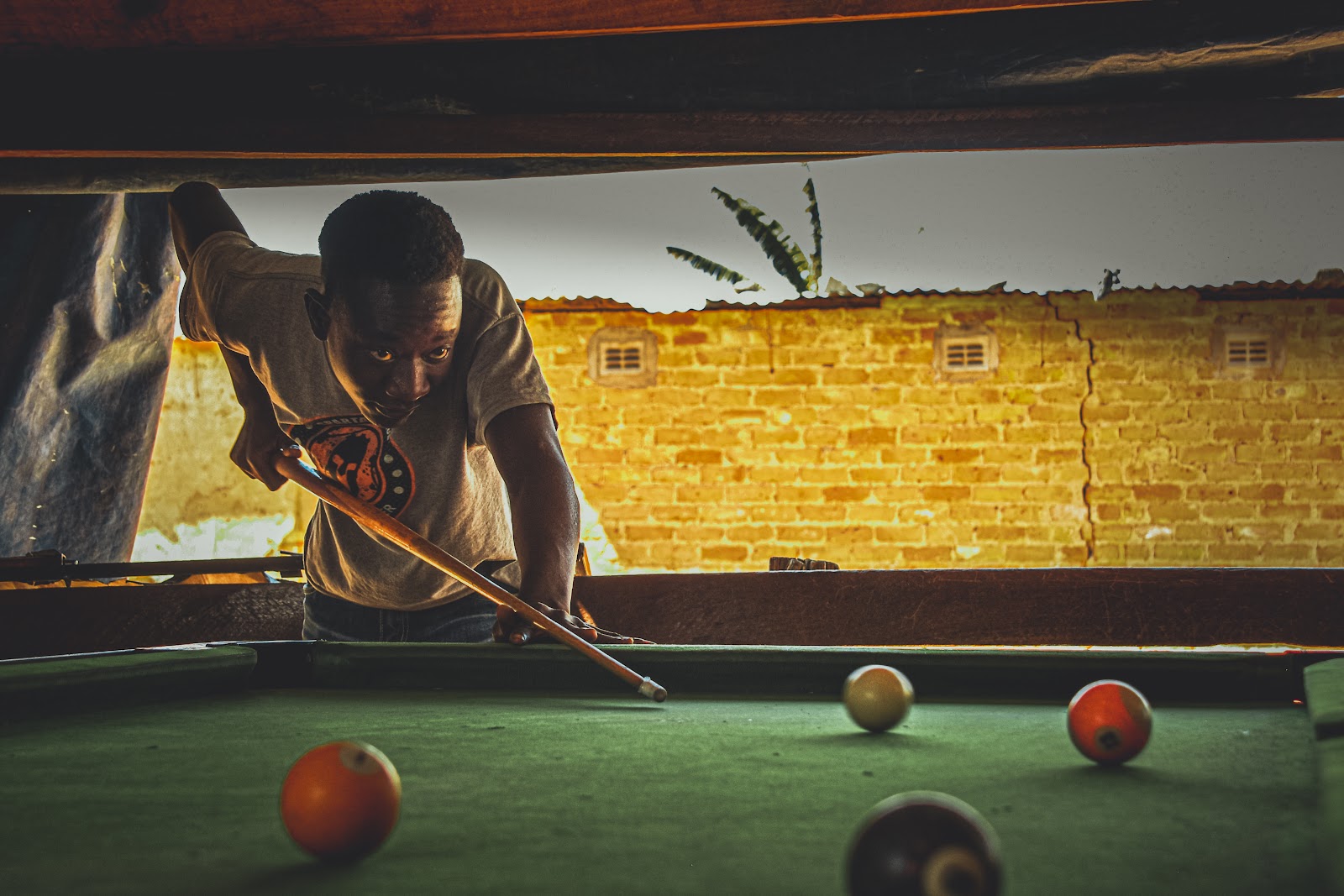 A young man enjoys a game of pool in one of the many hideouts in Hopley.

The youths bet on these games and use the winnings an income for their families. Some of them spend the whole day at these “snooker” spots waiting for a challenger who will place a good bet. 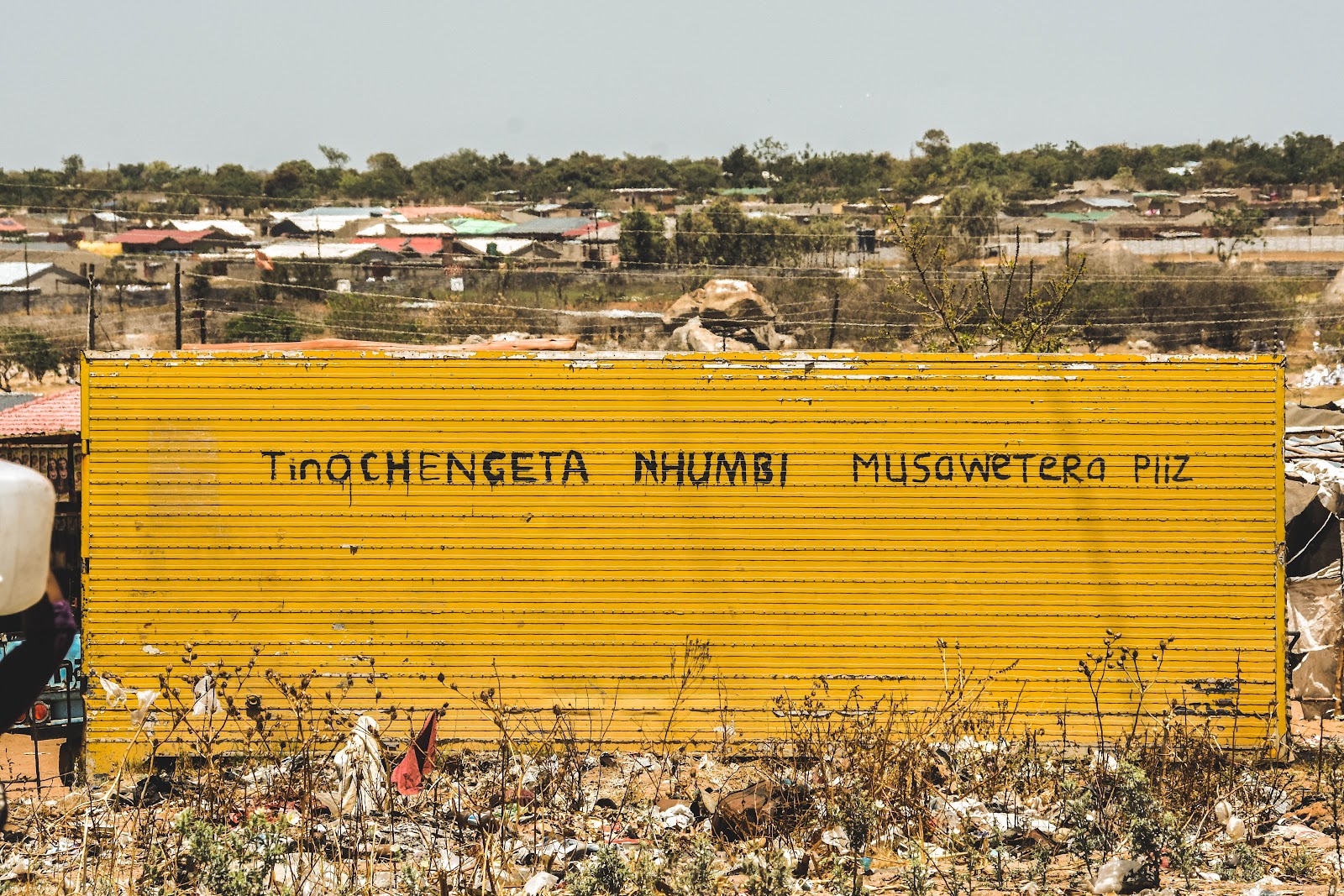 A writing on the side of a storage container warning the public against urinating on it. (Njambanja, Chitungwiza)