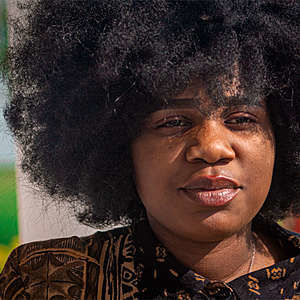 “There are customers who will pay more for service without protection. Sometimes you'd rather take the risk.”

“If you don't, how will you survive?” Joseph asked.

He sat in front of me and told me about all the things he does not have because of his work. He spoke of the neglect from law enforcement, the stigma that keeps him from accessing healthcare, and the selective frameworks that do not protect him when he is doing his work. The system has failed him constantly, but even more so in the last few years.

“We have been forced to reduce prices so that we can still have customers. If prices stay too high, customers won't come because the cost of living has increased for us all.”

Sex workers currently make a large part of Zimbabwe’s informal economy. In 2018, Sister with a Voice Zimbabwe, documented that there were over 75,000 sex workers in Zimbabwe. Over the last few decades, sex work culture has grown, and is neither taboo or rare in many areas of the country. The line between choice and circumstance has been blurred by a violent economy that has forced many people into dangerous and unfavorable work, given the patriarchal order of African society. Joseph is one of those people. He operates out of Unit L Chitungwiza, and has been practising sex work since 2015. After he completed his high school education, he tried for many different jobs to no avail. This led to him entering the world of sex work.

“This work is the only thing that keeps me alive. It keeps my child alive. My life relies on this.”

“Things are hard now. We don't know what to do.”

Over the last decade, hyperinflation, cash shortages, famine, and corruption culture have depleted the Zimbabwean economy, leading most of the population to live hand to mouth. It is reported that over 90% of sex workers are women,  most of whom face violence at least once in their lifetime, and at least once everyday when trading in sex. The remaining 10% are men, most of whom sleep with other men. In a country where sodomy is a crime (defined as consensual intercourse between two men, and criminalizes in section 73 of the Criminal Law Codification and Reform Act 9:23) and being a woman is viewed as a weakness, most sex workers are ignored and unprotected.

“Sometimes, people won't pay. But the police will tell you your job is wrong. Next thing, you are the one who is getting arrested.”

In addition to affecting their profits, this stigma has extended into their personal lives, affecting their physical and mental wellbeing. In 2017, UNAIDS reported that 56.2% of sex workers were suffering from HIV/AIDS. A lack of the development of comprehensive frameworks that challenge the status quo by policymakers means that the risks in unregulated professions are higher, and lack of access is perpetuated. It is curious that the number of sex workers, over 75,000 , corresponds well with the demand for sex services, and yet Zimbabwean institutions refuse to give the work the recognition it needs to ensure all those who participate in it are safe from violence and sexually transmitted diseases. As it stands, sex workers have been led to distrust the formal justice system because of the prevalence of victim shaming that comes with the work they do, and how they have decided to use their bodies for financial gain.. Even where they do not have to disclose their profession, sex workers are reluctant to access healthcare services because of psychological complexities and fears that cannot be divorced from sex work in Zimbabwe.

“In our work, we come across many things. It makes us afraid to go to the clinic because we don't know what we will find out there.”

With the option of equal and affordable healthcare being a far fetched idea, mental health is not something many poverty stricken Zimbabwean citizens have the luxury of thinking about. In the many conversations I had, sex workers expressed shock when I asked about happiness and peace of mind.

“If you want to start thinking about counseling then you don't want to think about money.”

Neither Joseph, nor the others want to speak at length about mental health. It is a faculty of elite living to them. It is an option that is only available to people who have resources, worse now that the economy means they are living hand to mouth. Between rentals, tuition, and general family costs, the quality of life for sex workers has taken a hit. Even while rejecting the ‘hypothetical’ option of mental health services such as counseling, the sex workers of Chitungwiza all seem to agree that alcohol and substance abuse are daily pleasures many of them use to get through the day.

“Before, I could visit my family and take lots of groceries for them. Now I have to send them little money because I can't afford bus fare.”

For many sex workers, who are the breadwinners of their families, and additionally, providers to their extended family out of the city, the increase in fuel prices have led to alienation from their support systems because they cannot travel frequently.

It is difficult to see a light at the end of the tunnel in Zimbabwe, given the current economic state, and as a result, it is difficult to lobby to enforce the rights of sex workers, or any other minority groups which are marginalized. Realistically, it could be decades until any transformative policies can be implemented across any sector. Sex work, for example, lacks coherent regulation. Section 81 of the Criminal Law Codification and Reform Act states that it is an offence to solicit sex. However, in 2015 Zimbabwe Lawyers for Human Rights won a landmark case that now prohibits law enforcement from arresting sex workers.
While this improves matters of unwarranted arrests and bullying of sex workers by the police, it does not protect the profession as a whole, and that gap in policy is where violence and intolerance culture manifest. Another such sector is mental health care There are currently six public institutions

with psychiatric services, against a population of over 2 million, which means that even if Joseph or other sex workers needed mental health services, chances of getting effective and affordable medical attention are low.

Zimbabweans have moved past a place of hope. They tell their stories and fight their fights so life can be better for those that follow, and not for themselves. With every tragic headline and corrupt act, social transformation and gender equality are pushed further down the agenda. The ignored have been promised that they will no longer be such once the economy is up again. But decades have passed, and the injustices continue to breed. Conservative politics and selective application of religious principles have taken a front seat in policy making, leaving behind all those who do not fit into the limited notions of what it means to be a woman or what it means to be a man.

Sex work is just the tip of the iceberg, because the streets are full of others forced onto the street by different tragedies, surviving however they can.